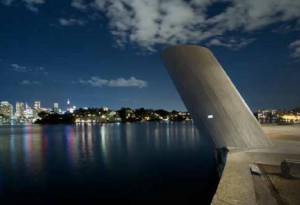 ROBYN BACKEN
Robyn Backen is an interdisciplinary artist and recipient of the Australia Council Fellowship for 2012-15. Backen’s new body of work evolves from her research into the acoustics of ancient whispering architecture and their unique communication patterns of sending and receiving.  Her installations actively engage with the spaces in which they inhabit –whether gallery, landscape or building: the site provides the structural and associative framework for both formal and conceptual elements.

Backen has a poetic approach which includes topics such as
randomness and pattern, body and language, borders and connections, distance and proximity, nature and technology. Her sound, lightworks, projections and computer generated systems are inclusive to audiences, inviting their presence in the work and effecting the possible outcomes.

Backen has completed many large public commissioned artworks such as Weeping Walls, Sydney International Airport 2001; Delicate Balance at Ballast Point Psark for the Sydney Harbour Foreshore Authority 2009 and Walls that Whisper Museum of Australian Democracy at old parliament House, Canberra 2009. She completed a commissioned performance for the Bundanon Trust Last Word 2012, and Night Watch, a 3 storey LED light work for the Brisbane City Council and the ATO in 2013.

Robyn Backen Coordinates the Masters of Studio Arts at Sydney College of the Arts, University of Sydney. 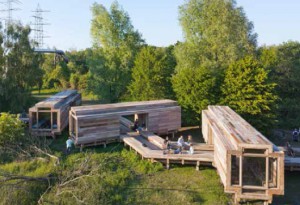 ANDRE DEKKER + OBSERVATORIUM
Artist group Observatorium–founded 1997 by Geert van de Camp, Andre Dekker and Ruud Reutelingsperger in Rotterdam, the Netherlands–creates sculptures that give new meaning and provoke new use in environments that are in transit. Wastelands, urban wilderness and suburbia are investigated and pioneering uses of the public realm explored, using sculpture, landscape architecture and participatory place making. Very often the architectural sculpture is a place to experience a sense of wonder. Dekker is an author, editor and guest professor at universities in the Netherlands, France and Germany. In 2003 he founded the Open-air University. 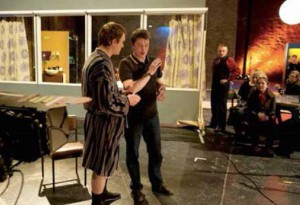 Graham Eatough is a theatre maker who also works in visual arts and film.

Graham co-founded Suspect Culture theatre company in 1992 with
writer David Greig after meeting at Bristol University. Graham was
Artistic Director and Chief Executive of Suspect Culture from 1995 until the company ended in 2009. During this time Graham directed and occasionally performed in, fifteen productions for the company which gained an international reputation for high-quality, innovative new work.

From 2006 Graham expanded the company’s artistic remit to include projects in film and the visual arts. This led to Killing Time, Graham’s first collaboration with Glasgow based artist Graham Fagen at Dundee Contemporary Arts, Stage Fright, a visual Arts exhibition at CCA 2009, and Missing, the company’s first short film which Graham wrote and directed.

Since 2009 Graham has continued to direct theatre as well as developing projects in visual art and film. His most recent projects include directing HeLa by Adura Onahsile which won Scottish Arts Club Best Scottish Production at the Edinburgh Fringe, and The Making of Us, an interdisciplinary collaboration with artist Graham Fagen for Glasgow International Festival of Visual Art 2012. The film of The Making of Us premiered at the Edinburgh International Film Festival 2013. 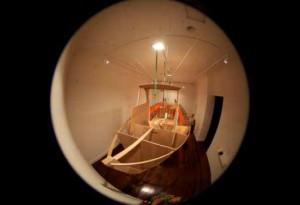 Nigel graduated with a BA Honours in Sculpture at the Liverpool
College of Art, UK (1974) followed by an intensive three year research Masters in Environmental Media at the The Royal College of Art, London (1979). Formal studies were concluded with a Doctorate at the University of Technology Sydney (1997) which focussed on the relationship of Soundscape, the Body and Architecture.

His practice is interdisciplinary, linking Art and Science, or more
accurately Poesis and Teche in a strong embrace of the environment, manifest as a range of complex works that form a nexus between art, community and ecology.

His Bio-Art collaborations have realised projects such as GeneMusiK a biological music remixing system, the insect installation Host and as the Artistic Director of the infamous LifeBoat project shown in Oslo Fjord 2004, on a Baltic cruise ship during ISEA 2004 and in Zagreb 2006. He is currently working with environmental scientists at the Institute for Marine and Antartctic Studies at the University of Tasmania to sonify biologging data collected by Elephant Seals and with Macquarie University to create an interactive cultural and environmental portrait of the Bundanon Trust site in NSW. 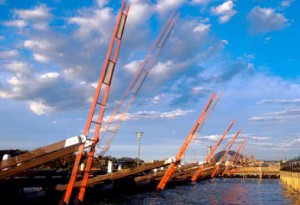 JENNIFER TURPIN
Jennifer Turpin is a public artist with 20 years experience creating
kinetic installations engaging water, wind and light as sculptural media sculptural. Together with artist Michaelie Crawford she creates dynamic site-specific kinetic artworks in the public realm at the interface of art, science, nature and the built environment.

Form Follows Movement
Activated by the complex dynamics of water, wind and light or by
rhythmically controlled sequences, sculptural form collaborates with nature’s energy to become both animate and performative. Creating rhythms in the city the artworks provide an energetic nexus between the active viewer, the local and momentary qualities of the natural elements and the specificity of place.

Jennifer has worked collaboratively on public art projects in Sydney,
Melbourne, Brisbane, Singapore and regional NSW. To realise their
innovative sculptural projects Turpin + Crawford Studio work closely with scientists, engineers and specialist designers. They have
participated in multi-disciplinary design teams and embrace specialist curatorial projects as part of their studio practice.
Jennifer recently received a Churchill Fellowship to research the cultures of water in urban environments in the Middle East, India and Europe.